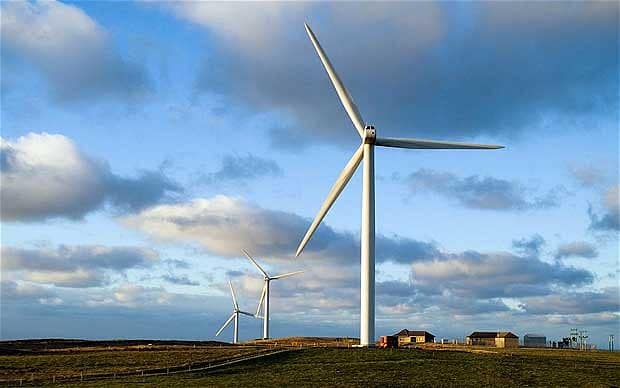 Onshore wind projects are at risk of stagnation due to the removal of subsidies by the UK government. It originates back to a 2015 manifesto pledge by David Cameron (remember him?) to ban the subsidy due to concerns from members of the public, which sounds a lot like the return of ‘Nimbyism’

The ban on subsidies does only affect onshore wind power projects, but considering that onshore wind farms have twice the capacity of offshore, it would be a huge loss to the growth of renewable energy in the UK as well as jobs and economic development.

Onshore Wind Power in the UK

There was record growth in 2017 of onshore wind power generation. One-fifth of the total current onshore capacity was installed last year alone, taking the total to just over 12GW and generating 7.5% of the total electricity used in the UK in 2017.

Due to the ban on subsidies, RenewableUK predicts that new onshore wind projects will drop dramatically to less than 1GW of annual new capacity over the next few years. That’s obviously assuming no U-turn from a Government that once again promised it would be a very ‘green’ government…

Renewables vs Fossil Fuels: The Tale of Two Subsidies

Fossil fuel projects, in comparison, receive huge subsidies as well as tax breaks, and whilst there have been a number of promises from all G20 countries, the UK has actually increased subsidies to fossil fuel companies. Fossil fuel companies receive almost £1billion in subsidies from the UK Government, varying from research and development of projects to their decommissioning; the UK taxpayers are helping to pay for oil and gas companies to clean up once they’re finished.

Recently I travelled up to Newcastle, from Southampton, to visit family. In Southampton, there are very few signs of renewable energy. We have the geothermal plant near our city centre, solar is beginning to creep onto the rooftops of the cities many buildings, and there are no more than a few wind turbines attached to buildings that rarely seem to be operating. But on my travels up north, passing Nottingham and much of the Midlands it’s completely different. There are wind turbines dotted all across the landscape and it was encouraging. This is what the future could be like with similar development up and down the country. Also, it was certainly a much better sight than the number of fossil fuel power stations that can be seen either side of the M1.

The UK Government, by continuing and increasing the number and amount of subsidies that fossil fuel companies receive, are allowing fossil fuel companies to continue to damage the environment at less of a cost for them, whilst using money from taxpayers to fund it. Cleaner, and now cheaper, forms of energy generation are available, yet the UK Government is backing away from the technology of the future for the technology of the past. Their argument that they are keeping energy costs low is false. European Governments have been able to reduce fossil fuel subsidies whilst also reducing the cost of energy. Why? They recognise that the future of energy is in solar, wind, and other forms of renewables.

The climate crisis is being dragged into disinformation campaigns and 'culture wars' in attempt to divide people on the settled science and delay the urgent action required...
The Sustainability Map is now featuring stores in Ipswich, Shrewsbury, Yeovil, Newquay and Ashford!
A huge result in the EU Parliament confirms that new petrol and diesel cars will not be sold by 2035 within EU countries!
The cost of energy and the price of petrol is rising rapidly, pushing many more into poverty. Without help there millions will struggle, so what's being done about it?
Parts of New South Wales and Queensland, Australia, have been almost completely destroyed by torrential rain and flooding in recent weeks, with the country declaring a national emergency on its east coast. The link in the caption shows just how devastating the floods have been!
Whilst many of us are doing what we can to lower our carbon footprint, Lufthansa are operating 18,000 empty flights just to secure landing rights at airports all over Europe! Surely more should be done to avoid this?
Loading Comments...
%d bloggers like this: