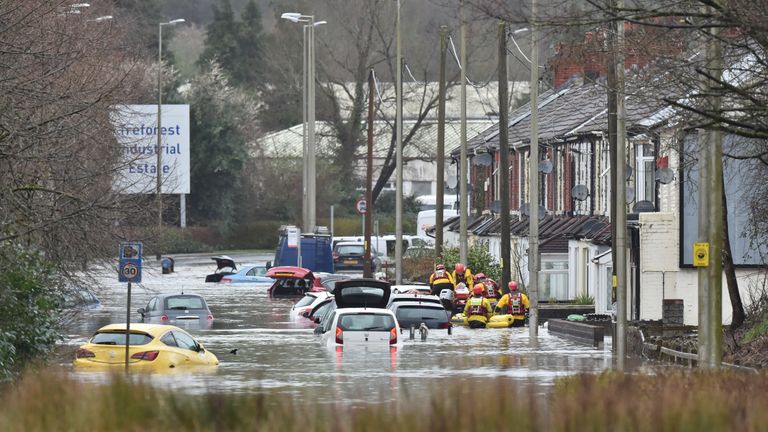 Why the UK Needs to Get Used to Flooding Events

At the start of the year we saw huge deluges of rain create huge flooding events all over the country but particularly in South Wales, Shropshire, Herefordshire and Gloucestershire. Very high winds led to thousands of homes being cut off from the power grid and falling trees blocked roads, completely isolating some communities. The weather has since calmed, but for a few weeks it was storm after storm and there was no respite for any of the worst-affected areas of the country.

Flooding events seem to have become an increasingly regular occurrence in the UK. Whether they’re flash flood events or flooding from prolonged periods of rain, each year the frequency and, in some cases, the intensity of flooding seems to increase. Flooding in 2007 was some of the worst recorded in the last 60 years, the 2013-14 winter was the wettest on record and the amount of rainfall between November 2015 and January 2016 was the most on record for that period.

There is no doubt that the amount of rainfall we have has increased – we can see that in the number of rainfall records that have been broken in recent years. But is that the only reason why we seem to be seeing so many major flooding events here in the UK? Is it just more rainfall or are there more systematic problems in our built environment and our flood management techniques?

The Influence of the Climate Crisis

Climate projections suggest that as global average temperature rises, summers will become hotter and drier, whilst winters will become wetter. The amount of precipitation we receive will increase during winter months by around 10%, but we should also expect a greater number of heavy rainfall events. All sorts of weather records have been broken in recent years, particularly in relation to hot, summer weather. However, some rainfall records have been broken, and I would not be surprised if more continue to be broken in the near future.

There are two aspects of a warming planet that will increase the amount of rainfall we receive. The first is the increase in the rate of evaporation. Our oceans are warming at a quicker rate than the average global air temperature is and it’s leading to mass coral reef bleaching and an increase in oxygen-starved areas of the ocean. The warming of our oceans makes it much easier for evaporation to take place so, in the example of the UK, more water is evaporated as storm systems travel across the North Atlantic Ocean leading to much more intense storms hitting this country.

The second is the ability of the atmosphere to store more water. Alongside the increase in the evaporation rate, a warmer atmosphere means that more water can be held and stored before being dumped over land. This leads to more prolonged and intense downfalls that will increase the chances of flooding events.

All of this will only be compounded by the climate emergency. The less we do now to limit the impacts of a warming world, the greater the economic and social cost of flooding events like the ones we’ve seen in recent weeks.

The climate crisis is just one aspect of why flooding has become so destructive in recent years. The combination of poor planning policy and flood management has also exacerbated the situation. For years we have built on flood plains and transformed the land just so it’s just how we want it. Whilst we have just about managed to cope with the rare flooding events, the more intense and frequent rainfall events that are occurring due to the climate crisis are going to expose the poor planning policies and flood management techniques that have been in place in recent years.

As climate science has developed and our understanding of a warming world has increased, we’ve recognised a huge number of environmental issues in how we’ve developed economically and as a society. As the population of this country has grown, particularly in the last century, we have had to build more homes just to satisfy that rapid increase. It is that need for space for house building that led to some of the problems we’re having today.

Perhaps the most major issue is that we’ve been building on flood plains. These plains are areas of land near rivers and lakes that are natural overflow areas. During times of heavy rains when rivers burst their banks, excess water overflows onto these plains until it can be absorbed into the ground or can return to the river and continue the flow downstream. Most importantly, this is done over an extended period of time.

As we build roads and houses over these flood plains, the ability of the ground to absorb water during rainfall events is dramatically reduced. Water either collects in low-lying areas with no drainage or flows directly into streams and rivers that’s already storing excess water. The combination of this and the increase in frequency and intensity of rainfall events come together to create the dramatic flooding events that have affected so many communities in recent weeks.

So surely with the dramatic increase in flooding events over the last decade and the risk of flooding increasing in the future, the UK Government would be looking to avoid building houses on flood plains?

A report by Greenpeace at the end of 2019 found that the Government were planning to build around 10,000 new homes in areas that are classed as flood prone. At the end of 2019, huge areas of Lincolnshire, South Yorkshire and Derbyshire were flooded after heavy rains with towns like Doncaster and Fishlake particularly affected. In Lincolnshire alone, 5,000 homes have been proposed on areas that were underwater during these floods – even in areas with natural drainage.

When considering areas of land to build new homes, official planning policy is to follow advice provided by the Environment Agency and carry out flood risk assessments based on location to a river and the vulnerability classification of that development. Given the amount of flooding this country has seen in recent years and the planning of developments in areas known to flood, it’s fair to say that this advice has not been taken.

This is not just a failing of the current government but of successive governments. The current Conservative Government have the ability to review current housing policy and, after the most recent flooding crisis, a number of Tory backbenchers have called on that to happen. Whether it will, we are yet to see.

Now unless we can go back in time and rebuild those houses that are on flood plains elsewhere, what we need to do is manage the land and properly plan for future flooding events. This can be done by using hard or soft flood management engineering methods.

Harder engineering methods generally include the construction of artificial barriers and other infrastructure that prevent a river from flooding or protect buildings. This can include walls along river banks or barriers in front of buildings to help protect them. They’re also not always permanent and can be constructed when anticipating flood events.

Softer engineering methods are more natural methods of river management and are all about reducing the rate at which rainfall enters a river. If the rate of water entering a river is slowed down, the chances of a river bursting its banks are reduced. This can include the planting of trees, greening of urban areas or allowing nature to manage flood waters in ways that it has done for thousands of years.

When it comes to urban areas, the planting of trees can have a huge impact. Trees slow the rate of water that reaches the ground, thus reducing the speed at which water is diverted into the river flowing through that urban area. Just another reason why urban greening is vitally important.

Neither of these methods of management can work alone. If we only tried to build our way out of flooding, so much water would enter a river at a quick rate that localised flooding towards the end of a rivers course would be catastrophic without the construction of incredibly high walls along the banks of rivers.

Similarly, if we only tried soft methods of flood management then urban areas would still flood because of they way they have been built- it just might not be quite as bad. It’s the combination of these two methods that will be most effective in protecting those urban areas located at highest risk of flooding.

These Floods Will Keep Happening

No matter how we build or develop flood defences here in the UK, the climate emergency will ensure that flooding will still happen and it will only get worse. More rain will fall at a greater intensity onto land that has been built on and cause more and more damage. Flood defences will have some impact in reducing that but as long as houses are built on flood plains there will always be flooding.

In order to reduce the impact that future flooding events have, there are three things that must be done simultaneously:

We can’t go back in time and rethink where we’re building houses that have already been built, but what we can do is change it going forward. We need to stop building anywhere where there is a risk of flooding. The economic and social costs are only going to increase with that changes to rainfall that are expected due to the climate emergency – and those costs will be much higher than if we proactively manage the risk of flooding now and in the future.

Shell's enormous profits should not be happening at a time of global inflation and the climate emergency.
Oil spills rarely seem to make the news unless they're of considerable size, if they did maybe we'd be pushing harder to move away from fossil fuels. This time, 30,000 gallons have leaked into the crystal clear waters of the Bahamas!
If you've ever wondered why so little has been done to tackle the climate emergency, or why there is no conversation about the price gouging of oil prices with fuel costing so much, $1trillion per year can buy you a lot of influence...
Yesterday the UK baked in 40℃ temperatures and areas all over the country were ablaze with wildfires. Even now as temperatures cool, there are warnings for storms and flash floods in a number of areas of the UK...
The Welsh temperature record was broken, Luton Airport melted, and trains have been cancelled nationwide. Monday was a scorcher, today will be even hotter...
Annually, we are throwing away 100billion pieces of plastic packaging each year with only 12% being recycled? There must be more done to reduce the amount of plastic packaging used and an increase in what's recycled!
%d bloggers like this: